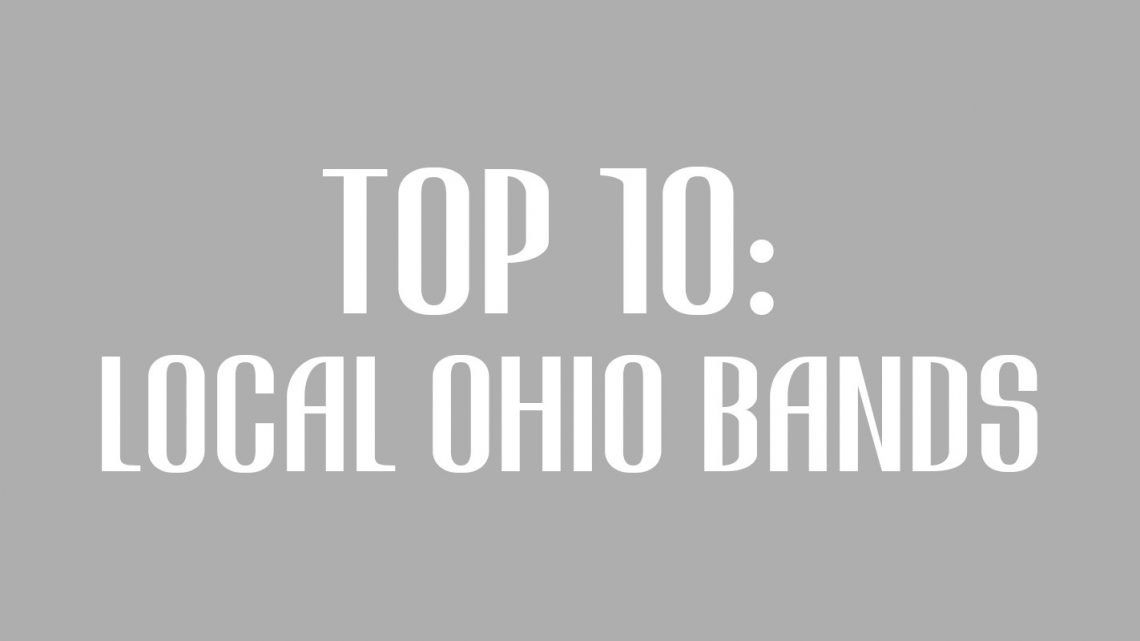 I’ve lived 20 miles from Columbus, Ohio for my whole life. Columbus is home to many famous bands and musicians, such as Nine Inch Nails, Dave Grohl, Dean Martin, The Black Keys, and most notably, Twenty One Pilots. Oh, and let’s not forget Bow Wow and Marilyn Manson, because no one expects those two people to be from Ohio of all places.

Ohio has one of the most unique music scenes in the country. In Columbus, there are record shops and music halls on every corner, but the sense of community is what really launches musician’s careers. As a proud community member, I want to share my top 10 local Ohio bands. I love Ohio, and I especially love the music that comes out of it, so I hope you enjoy listening to these artists as much as I do!

I like this band because it reminds me of the ’90s with it’s heavier sound. You can still hear the drums behind the guitars, though, so it’s not too obnoxious, clustered, or all over the place. It has a bit of grunge influence to it, with the lead singer sounding like a mix between Eddie Vedder and some other ’90s singer that I really can’t put my finger on right now.

Like I mentioned in the introduction, Ohio has been home to musicians like The Black Keys and many other alternative bands. However, I failed to mention that Ohio also has a ridiculous amount of emo in it. Black Veil Brides, Hawthorne Heights, The Devil Wears Prada, Beartooth, and Attack Attack! are all from Ohio. So I couldn’t resist sharing a little pop-punk band from Cincinnati. (The band is especially pop-punk because, like their elders before them, they made original Christmas songs. My favorite is the self-titled song on Merry Christmas, Ya Filthy Animal).

Songs to Listen to: “Feel It In The Air”, “Girl In Front”, “Become Someone”

The more I research these bands, the more connections I make. Randall Rigdon Jr., Coleman Williams, and Joseph Sparough are the bandmembers of Dark Colour. They first started recording their first singles in 2015 with Jacob Merritt and Isaac Karns, both members of the fifth band on this list, Pomegranates.

*Go to Sonicbids to listen to the last two, I couldn’t find them anywhere else.

The Yugos self-titled album is good, yeah, but their sophomore album, Life Is Awesome and Then You Live Forever, is even better. On cincymusic.com, they were described as having an “admirable D.I.Y. spirit, super high energy live show, and ever-positive vibrations,” which is exactly how they should be described.

Pomegranates is from Cincinnati, which, like Columbus, has a big music community. Pomegranates has shared the stage with Peter Bjorn and John, Young the Giant, Ra Ra Riot, Phantogram, and Jimmy Eat World. They’ve released 5 full-length albums and 2 EPs so far in their career, but I doubt they’ll be stopping soon.

Songs to Listen to: “Anywhere You Go”, “Ezekiel”, “This Land Used To Be My Land, But Now I Hate This Land”

Fun fact: Sebastien Schultz, Multimagic’s drummer, was also the drummer for Bad Veins. Another fun fact: Pomegranates and Bad Veins are on the same record label, Modern Outsider. Bad Veins has been around for awhile, touring frequently with Two Door Cinema Club, Walk The Moon, and St. Lucia. They’re some pretty lucky guys, if you ask me. They’re also ridiculously talented.

Songs to Listen to: “Rainbow Connection” (Yes, a cover of the Muppets’ song. It’s a fantastic cover, I promise), “Afraid”, “Gold and Warm”

If you like the songs by Modern Aquatic, listen to a song called “I Apologise (Dear Simon)” by Moss. Moss is Dutch, not from Ohio, but they’re still a great band, so look them up. Modern Aquatic gives me chills with some of their songs because of how relaxing certain parts make me feel.

They’re known for garage rock and experimental light shows at their gigs. The Harlequins is a trio of cool guys who make intense music with insane results. Their most popular song, “Schizo Radio”, is all about guitar hooks and the sultry voice of Michael Oliva. It’s an amazing experience listening to that song, and I really hope that their live shows are as cool as the hype for them is.

Songs to Listen to: “Psychic”, “Not Dead”, “Schizo Radio”

“Pink Champagne” seriously reminds me of what a modern-day John Hughes soundtrack would sound like. The chorus is so Pretty In Pink and the beginning reminds me of “Love Me” by The 1975 because it has that Duran Duran feel to it. If I were writing a movie, I would put “Pink Champagne” as its theme song. It’s a memorable song, and it’s sweet enough to survive as something iconic.

The song “Gates of Dawn” by Heartless Bastards is one that deserves to be heard. Look it up and see if you like it!