Vans Warped Tour is known as the holy grail of the punk rock music festival scene. Starting its insanely successful path in 1995, Warped Tour was a mainstream music festival honing in on alternative rock music. The following year in 1996, one of Warped’s sponsors, Vans, decided to take over, making it Vans Warped Tour. As well as Vans, other sponsors such as Monster Energy and Journeys contributed to the gig. If you look at the main stage names – The Monster Energy and The Journey’s Left and Right Stage – these sponsors are prominent throughout the tour.

Over the past 21 years, Warped has showcased artists and bands of many different genres. Musicians such as Katy Perry, Billy Idol, Avenged Sevenfold, White Chapel, All Time Low, The Ready Set, and many more have performed on the main stages. Not only did it help out more of the well known artists, but they also have a knack for helping out some local bands around the areas the venues are placed. With outrageous energy, pumped up crowds, and amazing vendors, Vans Warped Tour is a must for any music lover.

This year, the tour revisited New Orleans, Louisiana after 15 years of absence from the city. Playing at Mardi Gras World, bands such as May Day Parade, Falling In Reverse, We The Kings, Sleeping With Sirens, and Motionless in White joined together to support the return to the good ol’ South. With a heat index of at least 100 degrees, dedicated fans wrapped around the venue waiting in line to see their absolute favorite bands with the intentions to have a blast no matter the weather. Two lines were in effect, the main entrance line and one line to skip the main line. You bring either three canned goods, five dollars, or an old cell phone for each attendee to the skip line; the donated goods go towards the FeedOurChildrenNOW campaign which feeds hungry children in each city they visit. Pretty rad, right?

Walking into Warped Tour is one of the most energetic and amazingly overwhelming experiences you could ever have. Right through the entrance, there are booths lined up with people yelling through megaphones and giving out free items as well as bracelets, sunglasses, and CDs. These booths consisted of sponsors such as Alternative Press Magazine, Cool Gear, Fuse, Hopeless Records, and Fearless Records as well as booths with band merch that you can rock any day of the year! Grabbing all the free items and signing up for almost every single magazine subscription is just half of the fun of everything. After seeing the booths, you constantly get hit with pumped up tunes from every direction. A total of seven stages are placed throughout the venue with a band always playing on at least two of the stages at one time! Too much noise, you say? NEVER! The stages are uniquely set up so that no music is overlapping. So no worries, no one will be singing over your favorite songs!

Safety is key. No one’s first time at warped is a pleasant experience unless you’ve headed over to vanswarpedtour.com prior to the event. Check out the Warped 101 section where they give you tips on how to stay cool and hydrated so you can have the most spectacular time of your life! Some important items to bring are a sealed bottle of water, a homemade snack, sunscreen, hats, and sunglasses! Please protect yourself from those nasty UV Rays. For all of those going backstage or to the photo pit, please wear earplugs, it’s a necessity! You’ll thank me later! No, seriously.

This year, I had the amazing opportunity to attend the TEI Class with the official Warped Tour photographer, Lisa Johnson. You can see some of her work on almost every single Warped Tour CD throughout the years. The TEI class involved 40 minutes with Lisa which included a chat and one show to shoot photos in a photo pit. That’s a pretty big deal, right? Well, little did I know I would get to spend three and half hours meeting band members and tech crews, eating in catering, and photographing THREE sets in the photo pit!

Lisa took me through all of the backstage areas to meet other photographers, interviewers and some tech crew. Meeting such important people behind the show lights was an eye-opening experience and very inspiring. Something that’s not common and that I had the privilege to do was go to catering. After being in the smoldering heat for hours, it was a huge relief walking into an air conditioned area filled, and I mean filled, with band members waiting in line for food. Seeing band members act like normal humans (which they are, shockingly) was outstanding. So many of those people waiting in line for food were someone else’s idols, and being able to stand in the same room with them was crazy.

While eating our food from catering, Lisa and I chatted about shows going on that day. Thinking that Lisa had already chosen the show we were going to, I was shocked when she asked me who I wanted to see. I told her a few bands I had in mind including Ghost Town, Issues, and We The Kings. She nodded, finishing up the rest of her Coca Cola and we headed out towards the stages. I couldn’t believe it when we showed our passes and walked up to see We The Kings doing what they do best up close and personal. Snapping photos constantly until the first three songs flashed by was so thrilling. Still under the impression that I would only be able to photograph one band, you could only imagine my reaction when Lisa took me over to the Masked Intruders’ set. Let me tell you, they are one of the most hilarious bands I have ever seen live! If you are into comedy along with super talented musicians, be sure to check them out!

She asked if there were any others shows that I wanted to photograph and of course I did – it was Warped Tour! So, walking through the huge crowd of fans to the photo pit, turning on my camera, and looking through the lens to see Falling In Reverse was the highlight of my day. It was so overwhelming at the time; I didn’t even realize what was happening until later that night after I had left the show. On the drive home, I thought about what happened that day and if it was even real life. So many of my wildest dreams came true that day! I definitely recommend attending Vans Warped Tour!

The remaining dates of Vans Warped Tour 2016 – found at http://vanswarpedtour.com/dates/ 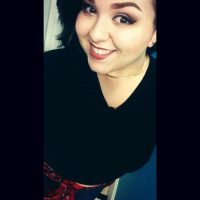 About the Author Savannah Sears